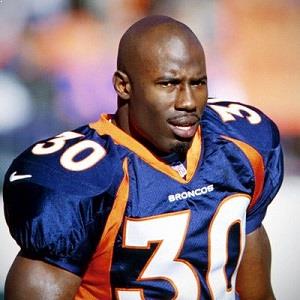 Terrell Lamar Davis a former running back who played for the Denver Broncos of the National Football League (NFL) from 1995 to 2001.

Davis was drafted by the Broncos in the sixth round (196th pick overall) of the 1995 NFL Draft. He is the Denver Broncos all-time leading rusher, with 7,607 rushing yards. As a player, he was given the nickname “T. D.” by players, fans and the media; this denoted both the initials of his first and last name as well as being an abbreviation for touchdown.

He, John Elway, and Peyton Manning are the only three Broncos named league MVP. Davis is one of only six players ever to rush for more than 1,000 yards in the postseason (1,140), and out of the six he is the only one to do so in a career that lasted less than 12 seasons.

In 2004, Davis was inducted into the Colorado Sports Hall of Fame. On July 27, 2007, it was announced that Davis would be inducted into the Denver Broncos Ring of Fame. On February 7, 2016, Davis and John Elway served as the Broncos’ honorary captains at Super Bowl 50 in Santa Clara, California. They also appeared at the pre-game ceremony honoring the past 50 Super Bowl MVPs.