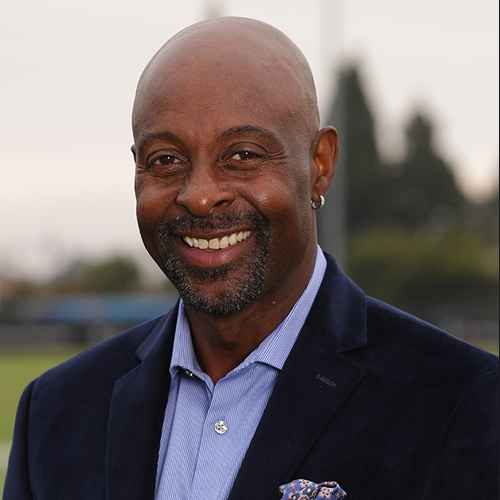 Speaker January 13, 2023 - Hall of Fame wide receiver and three-time Super Bowl champion Jerry Rice is widely regarded as the best wide receiver to ever play in the National Football League, and arguably the greatest player of all time. During his 15-year career with the San Francisco 49ers, Rice won three Super Bowls (Super Bowl XXIII (’88), Super Bowl XXIV (’89) and SB XXIX (’94)) and one Super Bowl MVP. He enjoyed three seasons with the Oakland Raiders, including a Super Bowl appearance and one season with the Seattle Seahawks before retiring in 2005. Rice was elected into the Pro Football Hall of Fame in January 2010, his first year of eligibility.

Rice’s meticulous preparation and work ethic during his 20-year NFL career became legendary. He holds 36 NFL records – a record in itself. Has scored the most touchdowns in NFL history (208) and holds virtually every significant career receiving record, including receptions (1,549), yards receiving (22,895), all-purpose yards (23,546), touchdown receptions (197) and consecutive games with at least one catch (274).

After his retirement, Rice’s celebrity grew beyond the football field. He finished second in the second season of the ABC hit reality show Dancing with the Stars, led his team to victory on the golf course against other NFL legends on Big Break NFL Puerto Rico and has appeared on numerous other television shows. He has extensive broadcasting experience including as an analyst for ESPN, NBC and is a contributor on 95.7 The Game FM radio in the Bay Area. He co-authored the New York Times bestseller, Super Bowl 50: 50 years 50 Moments as well as, America’s Game: The NFL at 100 with Randy O. Williams and published by Harper Collins.

This success off the field and renowned work ethic has appealed Rice to numerous corporations, including NIKE, Mitchell & Ness and Panini, where he is working as a brand ambassador and spokesperson. He is also an Honorary Chairman for the San Francisco 49ers Foundation, whose mission is to educate and empower Bay Area youth.